“Hospitable Kazan” project is in work

Kazan is considered to be the 3-d Russian capital and this year Kazan is really the 3-d popular Russian city after Moscow and Saint-Petersburg for august trips according to Russian housing booking service Tvil.ru. The active development of tourist infrastructure takes place not only in the city itself, but also in the region. Now the state Committee of the Republic of Tatarstan on Tourism and Tatarstan Republic Assembly of Tourist Volunteers are realizing the project “Hospitable Kazan”. For this purpose, the informational tents are located in the city center: near the railway station Kazan-1, near the hotels Tatarstan and Nogay, on May,1 Square and at the theatre named after G. Kamal. Every Russian and foreign tourist can get any information, tours schedule booklet and the city map of Kazan free of charge here.
Management University students-volunteers studying tourism professions are working in these tents now. All of them have passed theory and practice beforehand. This work will last till August, 31. Three volunteers work in each tent, the total number of volunteers is 180 persons. The tents’ working schedule is 10:00-20:00 every day. Such tents appeared in 2017 for the first time in connection with FIFA Confederation Cup-2017 and then they also worked during FIFA World Football Championship 2018.
The August plan of events for Tatarstan visitors: 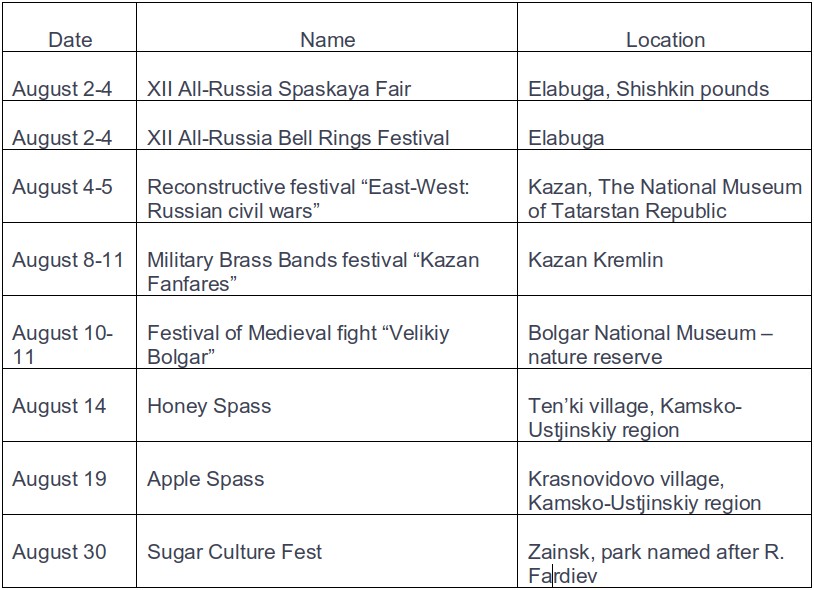 Eremeeva Marina, This article is written or translated by Russian Travel Digest’s News Team. Every day we search for the most important news on the Russian tourism and travel market to keep you updated.

Inbound tourism to Russia is at the level of statistical…

Leaders of incoming flow to Russia in the first quarter…

In the first quarter of 2022, foreign tourist flow to Russia…