Among the list of sessions, there were two having the most interest for tourism sphere in Russia:
1) Indonesia-Russia Trade Relations: Challenges and Opportunities towards USD 5 billion by 2020
2) Business Meeting Between Province of Jogjakarta and Tour Operators 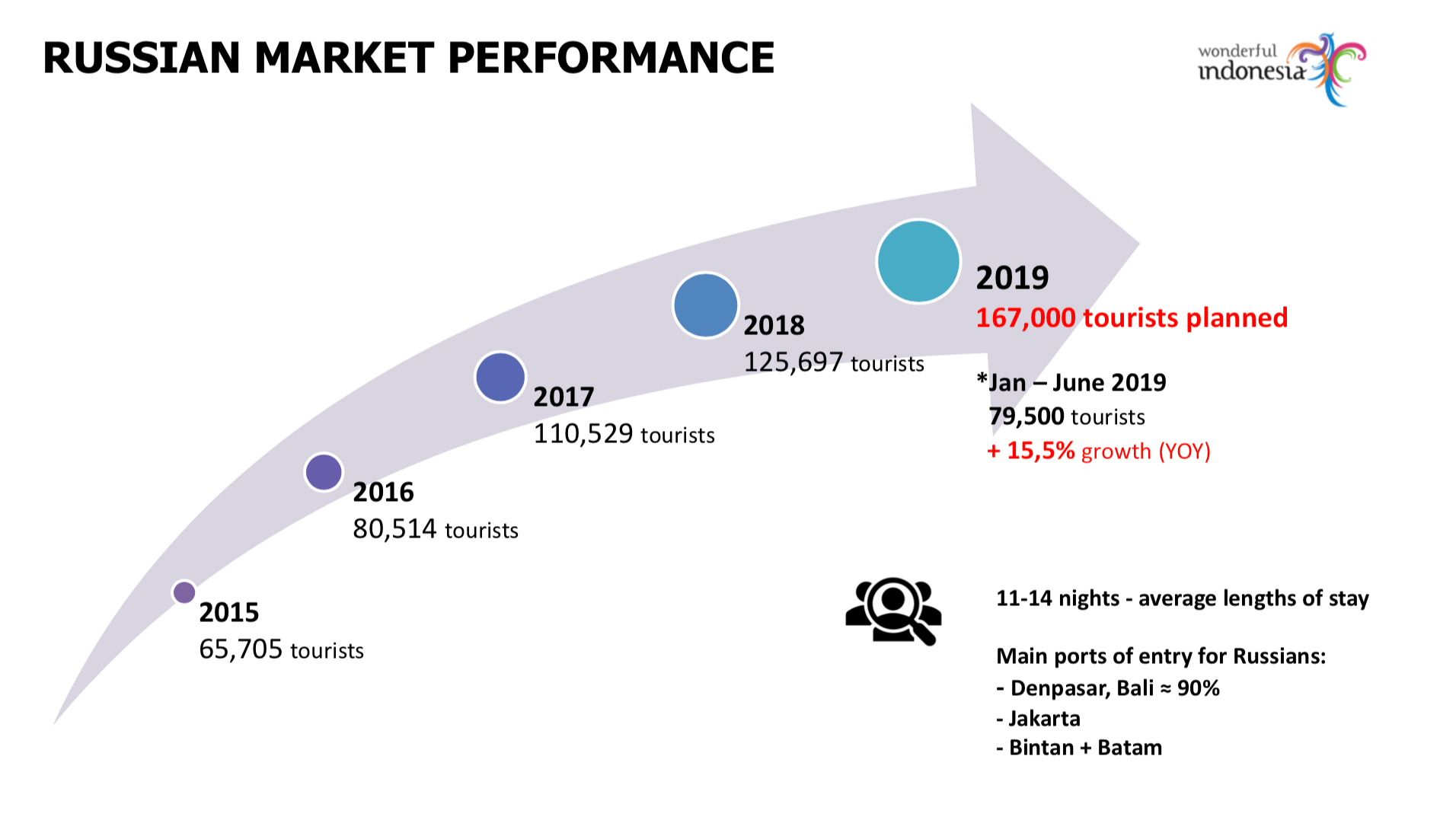 The presentation of National Tourism Board included the list of marketing activities, like: MITT and Leisure Exhibitions, Annual Business Forum and Wonderful Indonesia Festival in Moscow, annual sales calls in Moscow and Saint Petersburg, fam trips tour operators and travel agents, press trips for journalists and bloggers, as well as joint promotion with airlines and wholesalers

The ministry reported about completed joint promotion with airlines. On 28 October 2018 – Aeroflot/Rossiya Airlines in cooperation with Ministry of Tourism Indonesia launched Direct Flight from Moscow to Denpasar, Bali. Flight was operated by Rossiya Airlines using Boeing 777-300 Extended Range aircraft and flew until May 2019 for three times a week. On July 1, 2019 - Aeroflot-Rossiya Airlines resumed its flight program after its 1-month suspension in May-June. Flights are carried out twice a week on Boeing 777-300 Extended Range aircraft (436 economy class seats and 21 business class seats.

It’s important to mention that this Forum is one of the events of Indonesian Fest which is held in Krasnaya Presnya park in Moscow during 2-4 of August. There are exhibition of Indonesian products, master classes, fashion defile and representation of art and culture at the fest. August is seemed to be the proper time to start winter season preparation.

In the first quarter of 2019, 90.1% of the entire Russian tourist flow to Indonesia accounted for…

According to the Ministry of Tourism of the Republic of Indonesia, in 2018 125,700 citizens of the…

25 February 2019
Agustini Rahayu, Director of Tourism Promotion for Indonesia: We are planning joint activities with more than 20 Russian tour operators

On August 2, 2018 Moscow hosted the Russian-Indonesian Business Forum organized by the Business Council…

klimenok Natalia, This article is written or translated by Russian Travel Digest’s News Team. Every day we search for the most important news on the Russian tourism and travel market to keep you updated.

MICE Territory discussion will be traditionally held at…

OTDYKH Leisure 2022 is around the corner

The Tourism Fair – once again a place of encounters

The KITF-2022 anniversary exhibition returns in its traditional…

Tourism Fair for a new time