Thinking about number of Russian tourists annually visiting Greece, I was surprised that data of various sources differ so much. I analyzed statistics of Bank of Greece, Consulates of Greece in Russia, Russian Statistics Service, and Russian Border Service. It is also impossible to use statistics mentioned by officials in their speeches. "On the meeting with prime-minister of Greece Alexis Tsipras, the President of Russia Vladimir Putin announced that in 2017 Greece was visited by record number of Russians - 850 000 people". "About 950 000 Russian tourists came to Greece in 2018", the Head of EOT in Russia and CIS Polikarpos Efstatiou told on press-conference. "On MITT-2019 travel fair, Elena Kountoura, the Minister of tourism of Greece, announced that according to results of 2018, Greece was visited by 33 million foreign tourists, including 1 million of Russians". 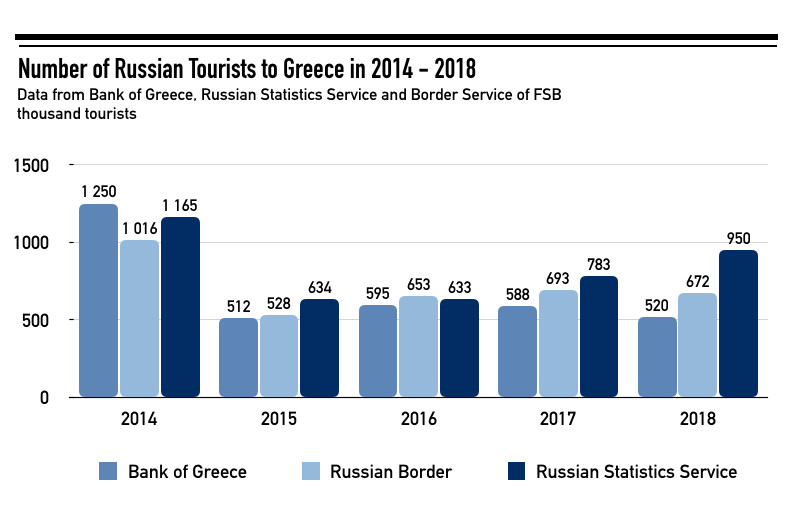 I suggest to focus on data provided by Bank of Greece. It is obvious that starting from 2009 till 2014 it was stable increase of number of Russian tourists to Greece. In 2009, the big Greek hotel chain entered the Russian market, offering big volume of different room types in its all inclusive hotels. It was real mass tourism product. It was also that time when medium-size Russian tour operators were looking for other destinations to compete with Turkey and stabilize its business. On the contrary, major Russian tour operators with headquarters in Turkey and therefore focused on that destination, were not interested in Greece, since economical crisis of 2008 forced them to concentrate on their primary product. So, interests of Greek hotel chains and medium-size Russian tour operators met, and five-year increase in flow of Russian tourists to Greece has started. 2013 was the best year when 1 352 900 Russians visited Greece. 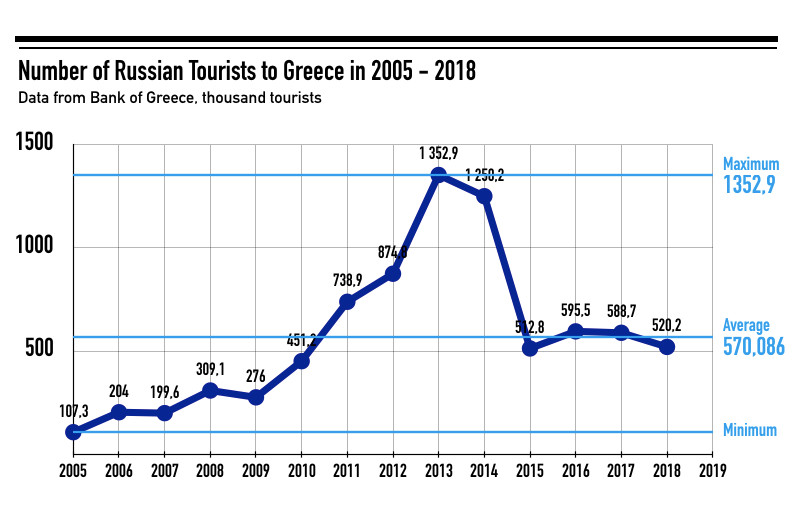 After crisis of 2014, the tourists' flow from Russia to Greece has fallen down to about 500 000 per year, and has not changed within the last four years.  The numbers of 2018 were quite similar to "dead" 2015, while the number of tourists from Russia to Turkey has even exceeded the pre-crisis years (excluding 2016 when there was ban of flights from Russia to Turkey). 2014 was also the year of bankruptcy of middle-size Russian tour operators, among them many were the biggest players for Greece (Labirint, South Cross, Neva etc.) 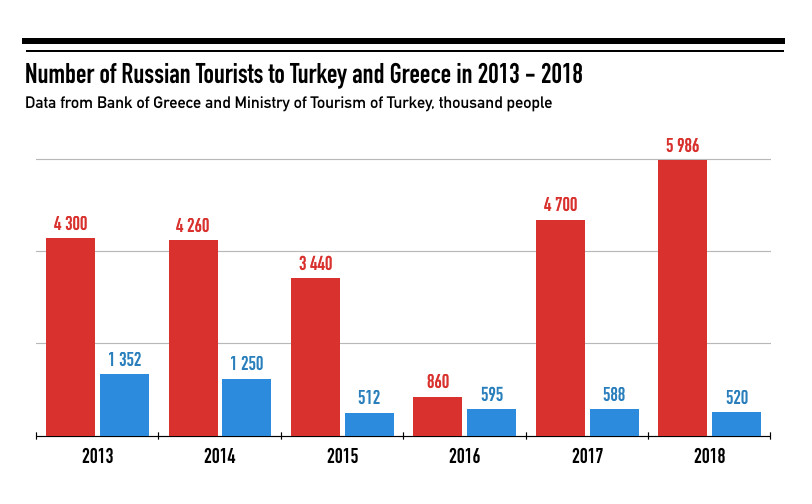 It is obvious, that nowadays efforts of major Russian tour operators are focused on sales of tours to Turkey, their primary destination, than on Greece, which is considered by them as a product for assortment. Exclusion is only for 2-3 medium- and small-size tour operators with Greek-based owners who send majority of their tourists to Greece, but the numbers are not as big.

Although, Greece is very popular destination among Russians, who likely would choose this destination for holidays, tourists more often prefer Turkey when they see rather long list of documents for getting a Schengen visa from Greek consulates.

In its materials, the Bank of Greece recommends "in such conditions all tourism and hospitality related sides to focus on prolongation of duration of stay than on increase on number of foreign tourists to Greece". But is not related to tourists from Russia, since they stay in average 10 nights in Greece. The Russian market which is growing on all other outgoing destinations, unfortunately, is not increasing to Greece.  Recently there are no serious companies who are ready to invest to development of tourism from Russia to Greece. In that case, the political decision about of visa regime for Russian tourists might effect to grow the numbers. For the beginning it could be be only for some categories of tourists, or for certain islands, or for certain types of accommodation.

Marina Zatsepina, With more than 15 years experience in Marketing in Tourism Industry, Marina is our expert in promotion on the Russian market. She worked in position of Marketing Director in one of the biggest tour operators in Russia, before to organize in partnership with Natalia Klimenok it's own enterprise. She graduated from Penza State University (Russia) with specialization in Public Relations, and has Master Degree in Russian-English Translation from Kent State University (USA).